When I got Piper more than 11 years ago – I read an unfortunate and ill-informed dog training book that said not to play tug with your puppy, because it promotes aggression. Bad advice. Especially for anyone considering dog sports. So as Piper got about a year old she would retrieve and knew all sorts of tricks, but wasn’t really interested in tugging at all. Her focus on me also seemed to disappear as well. She had always been pretty independent, but when I would take her to training classes – it was as if I was invisible. This was a class where each dog and handler worked one at a time while everyone watched. Of course we got all the Lassie jokes as my collie completely ignored my repeated attempts to get her to play while I felt the fixed stare of the all the people and dogs watching my every move. Now that – is humbling.

So my instructor encouraged me to find anything she would put in her mouth and slightly tug and then give her whatever her most prized possession was. So – she had many things that she loved – but by far her favorite was a deer bone she found once on our walk through the woods. Man – whenever I brought that thing out she would jump around it in a circle, bark and toss it up in the air. Sort of – well, pretty much exactly like – the snoopy dance. So – I had that piece – now to find what she would tug.

I needed something stretchy and light. I tried all sorts of things, but the only thing I could get her to tug was a pair of panty hose. Yep. That’s right. It was really stretchy and something she thought she probably wasn’t supposed to have – which made it even more enticing. Of course – it wasn’t the coolest looking tug toy. In fact – it was pretty embarrassing. But we had already done embarrassing – so I sucked it up. I grabbed that deer bone and the panty hose, stuck it in my training bag and off to class we went.

Well, we definitely got some funny looks at first. But it actually worked. She grabbed that pair of panty hose and tugged it – just ever so slightly, and then she got her prized possession. She partied so much with that deer bone that she and I both forgot a whole room full of people were watching us play with panty hose and a deer bone. 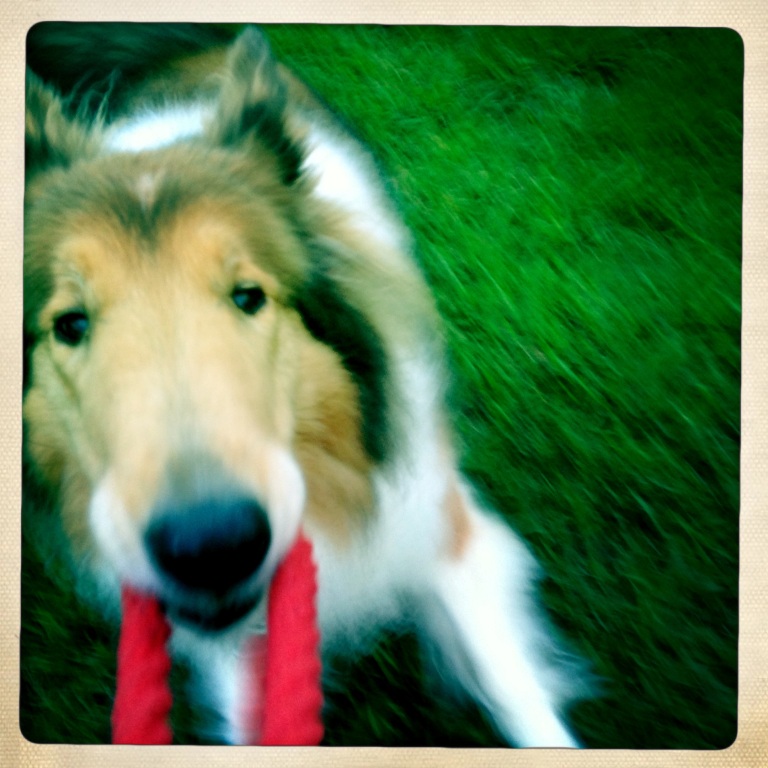 And it wasn’t long before every class – and in many different situations – I had her complete attention. Her tugging improved, and we were able to progress to an actual tug toy. Eleven years later, she’ll tug on just about anything I ask. So, eventually the panty hose went in the trash. But I think that deer bone is still around here somewhere. Just in case.

2 thoughts on “panty hose and a deer bone”